TRACKS TO THE FUTURE- Railway Structure Electrification and Its Impact

In the 21st century the world has started waking up to the call to save nature for a sustainable lifestyle. One such sector is transportation. Transportation alone contributes to a quarter ( 24%) of the total global CO2 emissions (remember it’s about just one gas being discussed, forget the rest). Considering the pre-Covid era, people had started switching to pool rides together. While battery-operated vehicles are replacing fuel burners for commuters, what about the longer distances? Railways have been the long distance lifeline for over 150 years and the cleanest way to travel for half a century thanks to the railway electrification system. Let’s find out what it is.

What is the railway electrification system?

Railway electrification is a system where the engine receives power from an external source rather than any on-board fuel supply. This power may be supplied either through an overhead wiring network or a parallel side rail connected with the engine through an equipment called pickup shoe. This system works across railways and tramways. Electrified engines are an eco-friendly alternative to traditional diesel engines which cause carbon emissions. Greater efficiency and other advantages have also led nations to pump up their railway electrification. According to a report by SCI Verkehr, the global market volume for railway electrification is EUR 9.6 billion (over INR 8.5 lakh crores) and is expected to grow at a CAGR of 0.7% yearly by 2025. In fact, out of 1.3 million km of tracks worldwide approximately 375,000 km stands electrified as of February, 2021 the report adds.

A spotlight on the benefits 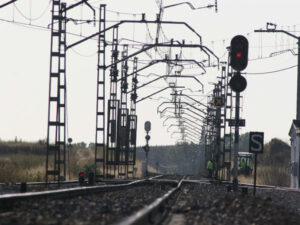 The first problem solved through electrified rail systems is lesser carbon footprint. There is no fossil fuel involved and hence the entire network is free of carbon and other polluting gases. This is especially advantageous for rails near densely populated areas. Also, they are less noisy. Sound pollution which is further coming down with technological upgrades.

An electric locomotive engine doesn’t need to have a fuel tank plus the added fuel in it. Due to the lighter weight, it’s faster and hence more efficient. The efficiency also encourages greater railway traffic. Besides, some braking systems in electric engines come with regenerative braking. This returns the kinetic energy generated through braking back to the system that saves up to 20% energy. 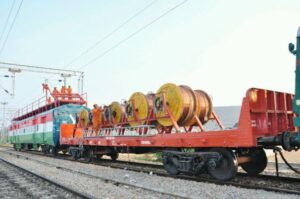 Diesel engines are heavy and tough to maintain. Due to the weight, they lead to higher track maintenance. With lighter engines, track life increases to increase safety and reduce maintenance costs.

The world depends on specific nations for their oil requirements. Oil ‘fuels’ not just vehicles and power plants but also the global economy. In fact when Indian Railways decided to electrify its network completely in 2020, it stated that the process will help them save INR 10,000 crore annually due to zero dependence on diesel — a direct impact of railway electrification in India.

It is true that power plants use fossil fuels. Still, the emission is less than that of vehicles and locomotive units. European countries are leading the list of electrifying their railway network with renewable resources. Netherlands became the first country in 2018 to derive 100% of the electricity for its railway network through wind energy. This ripple effect has made France, Germany, Spain, Italy, etc. move towards electrified railway networks as well.

Railway electrification systems & engineering demands hands and machines. Thus, it generates scope for employment primarily in developing nations since they have a lot of network to upgrade.

Different countries have different electricity systems. The variable equipment range has given rise to all types of manufacturers — niche marketers, national and global players — who are expected to be more familiar with their markets than anybody else.

Where are we heading?

Railway electrification has become a staple for railway networks globally as the world has sought to grow greener. While there are environmental impacts during construction, such impact is localized, short-term, and reversible. The weightage on railway electrification systems & engineering in Asia has risen sharply in recent years: from 34%, in 2013 to 47% in 2020. Although cost is high, railway electrification systems promise long-term returns by increasing efficiency of the network. These structures include galvanized Small Parts Steel (SPS), ERW steel tubes, counter weight guide tube as well as various steel structures for Railways Overhead Equipment (OHE) and Traction Sub-Station (TSS). The configuration for these equipment’s varies across countries in conjunction with their standards. India is among the countries that is committed to the cause and has achieved the highest-ever electrification of sections in 2020. Currently, Indian Railways has electrified over 45,000 (70%+) route kilometers (RKM) and plans to electrify all routes by 2024.